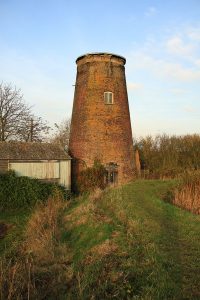 This lovely little walk explores the countryside around Acle Bridge and a nice stretch of the River Bure. It starts by following a section of road before following a footpath South, along a dyke to the River Bure. When walking this and the river section, keep a keen eye out for wildlife as Otters have been seen swimming in this part of the Bure and other waterfowl will also be about, such as Grey Herons, Mallards and Swans. In the reeds along the river you may also be lucky enough to see Reed Warblers, Sedge Warblers and Reed buntings.

1) From the small riverside shop, head along the track behind and up to the road. Turn left and follow the road for about 250m to the first road off to the right (signposted as Stokesby). Turn right here and follow the straight road for a little over 500m (1/3 mile) where you will arrive at a bridge over a narrow dyke with several public footpaths heading off in different directions.

2) There are two public footpaths on the right – one either side of the dyke. You need to take the one which runs along the left had side of the dyke. Follow this footpath south along the edge of the dyke for about 800m (half a mile) where it joins a track at a crossroads. Continue south in the same direction you have been going towards the river. Its about 450m further along the track to the river and you join it by a pumping station. 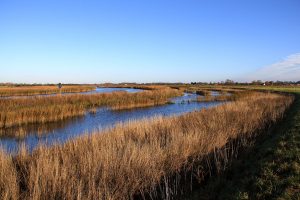 3) Turn right and follow the riverbank footpath for about 2.3km as it snakes its way back towards Acle Bridge. Near the end, the footpath turns away from the river and heads to the road next to the bridge.

Public toilets are located next to Acle Bridge with a small shop next door overlooking the river.

The Bridge Inn is the only pub located along the walk and offers an extensive menu in a lovely Broadland setting.