Take a look at our video on how to moor

For more information on Mooring please watch the Broads Authority videos Mooring Stern On and Mooring Alongside.

Points to check when mooring

When approaching the bank, watch out for any underwater obstructions, usually marked with red marker posts and for overhanging branches which might damage your windscreen or canopy.

Whenever you moor against a quay or made up bank, or double moor against other craft, make sure your fenders are adjusted so they protect the hull from chafing and do not obstruct any heating outlet. Mooring for any length of time in tidal reaches may mean periodic adjustments.

Make sure there is enough depth of water to prevent you going aground when the tide drops.

Leave enough slack on the ropes to allow for any tidal rise and fall, which will increase as you get nearer to Great Yarmouth

If mooring stern on, remember to unfasten your dinghy and pull it alongside to avoid crushing it

To avoid damage to banks, do not run your engine in gear when moored.

Do not moor up with ropes across a footpath. 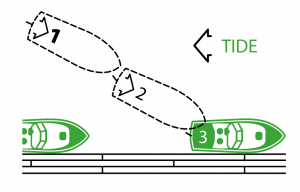 When you see the spot at which you wish to moor, follow these simple pointers:

1. Start to slow down

2. Approach the moorings against the tide – if you are not then drive past the spot, and turn around so that you are against the tide. Don’t forget to maintain sufficient power to retain steering control.

3. As you enter the mooring space, go into neutral and glide in. As you come alongside move the gear lever into reverse and give a few short bursts of the throttle to bring you to a standstill.

4. Your nominated crew member can then step carefully ashore with the bow mooring rope. Do not jump ashore, as the bank or quay may be slippery or uneven. Tie up the bow rope but not too tightly at first.

5. Because you have come in against the tide the stern will drift gently in. Tie the stern rope firmly and then retighten the bow rope.

6. Keep your engine running until you have safely moored up.

You are asked to moor stern on to the bank in boatyard basins, some yacht stations and at Wroxham, Ranworth, Rockland and Womack Staithe’s. Unless signs say that you can, do not moor stern-on on any river.

1. Stop with the bow opposite the point at which you want to moor

2. Put the rudder hard over, and give the throttle a few bursts ahead to swing the stern in line with the mooring space.

3. Go slowly astern, but don’t go too slowly that you lose control of the steering

4. As your stern approaches the quay, a couple of quick throttle bursts ahead will bring you to a standstill

5. Your nominated crew member can communicate with you when they are close enough to step ashore and tie up both stern ropes.

6. Keep your engine running until you have safely moored up.

7. Sometimes it is easier to jump onto the next boat with a rope and pull your boat in, but don’t forget to ask permission from the other boat owner.

8. If there is a strong crosswind or tide, make allowance for drifting. 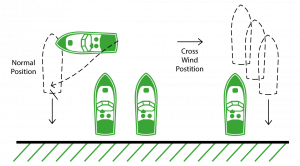 Mooring Stern On – next to other craft

1. Go astern slowly towards the boat alongside which you wish to moor.

2. As you reach it, a couple of quick throttle bursts ahead will bring you to a standstill.

3. Your nominated crew member can step aboard the adjacent boat (ask permission first) with the stern rope, pull your boat into position and tie up.

4. Once the stern ropes are secured, lower the mud weight at the bows to prevent left/right movement.

5. Keep your engine running until you have safely moored up. 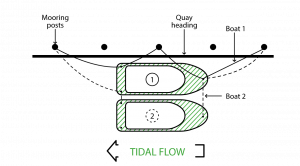 Where the river is wide, you may moor two abreast, but do not obstruct the channel. In particular, moor only in a single line near the railway bridge at Reedham as larger vessels need to manoeuvre.

Double mooring is allowed at Broads Authority 24 hour moorings where indicated by signs.

Some things to consider when mooring alongside another boat:

Assess wind and tide conditions (sometimes referred to as stream or current) and plan on the basis of the following guidance notes. Ensure your crew know their responsibilities. Start the engine and while allowing it to warm up check that the ropes are knot and tangle free, easy to release (from on board the boat if necessary) and not hanging over the side or stern.

1. Leaving with the tide or wind

Cast off the stern rope first and stow away. Allow the stern to drift out from the quay or bank. As you cast off the bow rope, engage the reverse gear and reverse into the main stream, when clear, Engage forward gear and proceed.

2. Leaving against strong tide or wind 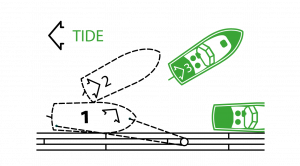 Adjust the boats position so that the stern rope is as near as possible at 90 degrees to the quay or bank and is easy to release. Cast off the bow rope first. Gently push the bow out as you step aboard (with the rope). Cast off the stern rope, engage forward gear and steer a shallow angled course away from the mooring. Too steep an angle, or too much power, may cause your stern to scrape along the quay or hit moored boats.

3. Wind blowing onto bank and holding you in ‘Springing off’

Remember these are not ‘hard and fast’ rules. There are possible variations depending on the strength of the tide and direction of the wind. The important thing is to assess the conditions and plan ahead.

Turning Around in a Narrow Waterway

Your boat will pivot around on its nose if the bow rope is held still. Approach the bank and when you are a few feet away, send someone ashore with a bow rope to hold the bow still. Put the steering hard over towards the bank or quay and engage forward gear at tick-over speed. The stern will then swing round and the boat will pivot on its bows. 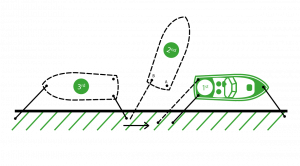 If you need to turn your boat round in a narrow dyke, this can be done from the shore using the ropes. Be careful always to keep at least one rope to the shore, and use the wind/tide to help you swing the boat. Don’t try this if the current is too strong.

Are you looking for a Norfolk Broads boating holiday? If so, have a look at our entire fleet of hire cruisers.