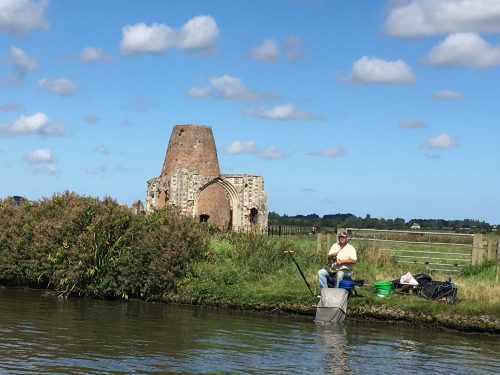 While there are the many peaceful areas to set up in the Broads, experienced angling writer John Nunn believes that, with the right tactics, there is much success to be had in tidal waters:

“The lower reaches of the Yare, Waveney and Bure have powerful currents that make legering with a heavy and open-end feeder the most successful tactic. Used in association with a stiffly mixed groundbait and large bait such as worm, sweetcorn or bread this is a good method for bream that inhabit these reaches.”

Use the boats to get around

The Broads are vast and varied. Angling Times writer Tony Grigorjevs recommends making the most of the Broads system by boat:

“The day boats also offered us the opportunity to make our way around the Broads system itself. Driving a boat may sound daunting to someone who has never ventured on to the water in anything more than a pedalo but believe me – you are missing out if you don’t have a go!“

Norfolk born match fisherman Lee Kerry grew up catching roach and bream on the Broads. The diversity and challenge of the area means it is still one of his favourite places to fish:

“I love fishing the River Yare in Norfolk, decisions need to be made regarding your choice of tactics, what species will you target.”

Persistence is as important as practice

With all the research and preparation that go into planning a trip, it could be quite disheartening when nothing bites, especially for a novice. But with more than fifty years’ experience writing about fishing, John Bailey believes that determination can turn a bad session into a success:

“If plan A doesn’t work then move to plan B and if necessary, to plan Z. Fishing is all about controlled impatience. If you simply sit back with the line tied to your big toe, as it were, you are going to reap what you sew and catch not much at all.”

It isn’t always about the biggest catch

In July 2017, Harleston’s match fisherman Karl Redgrave won the fourth round of the Nisa Feeder League, but it wasn’t one remarkable catch that won the day. Instead, bringing in a mixed catch of smaller fish was enough to win:

“While most competitors concentrated on the barbel, I fished for every species and finished with a catch of small roach, perch, dace, barbel and bleak.”

Karl’s decision to go for bream in the tidal conditions of the Yare demonstrates that smaller fish are not just for beginners, and if you are prepared to be flexible and to fish for a number of species, you are more likely to find success than if you are chasing just one species.

Professional Bass fishing might be a step up from bank fishing in the Broads, but Mark Menendez’s advice applies to all types of fishing, from the first-timer to match anglers:

“As I have gotten older I have realized that less is more a lot of times. It doesn’t have to be that hard to catch a bass. If the wind is blowing hard put the wind to your back and cover as much water as you can… If it is a day that is slick and high, blue skies, slow down.”